Posted on September 29, 2014 by babystepsandmommymoves

Oh, my goodness!  This weekend was one of the most fun weekends I’ve had in eons!  So much fun, and SO busy!  Buckle up, this is a long one!

Saturday morning, bright and early, I woke up, put on my cut up shirt, my eye-patch, and my running shoes, and headed out with my friend and our girls to the Pirate 5K. I have decided that after doing that race, I’m going to lay off my delusion that I can still participate in running races until I have much more time to devote to fitness, because it was brutal for me! Brutal, but super fun. My friend and I ended up walking a good majority of it, partly because I am wickedly out of shape, and partly because we had to stop every few minutes, anyway, to pick up a tossed sippy cup, shoe, or baby having a meltdown. We had plenty of time to chat, though, so it was still really, really fun! Maybe next year I’ll be able to do it some justice? We’ll see! 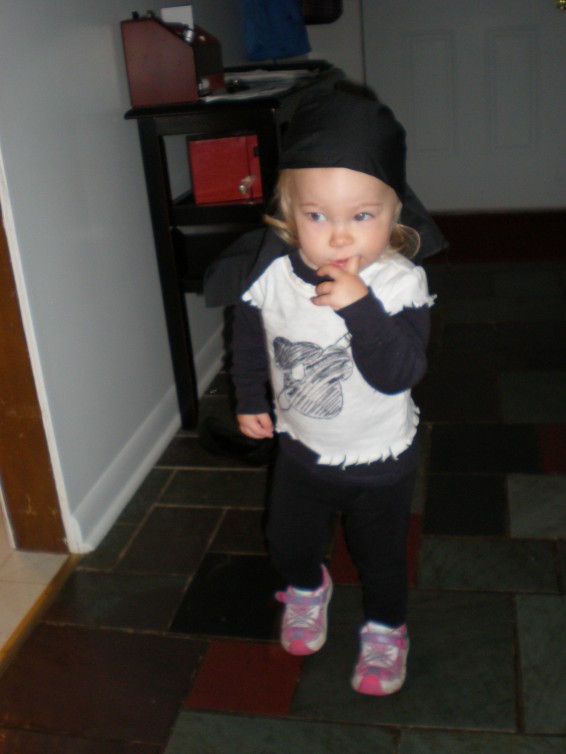 That would be my artistic rendering of “Pirate Mickey” on her shirt. 😉 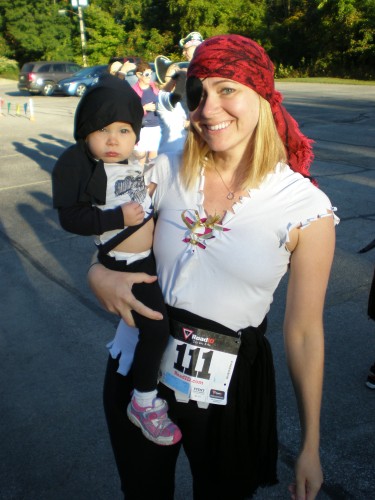 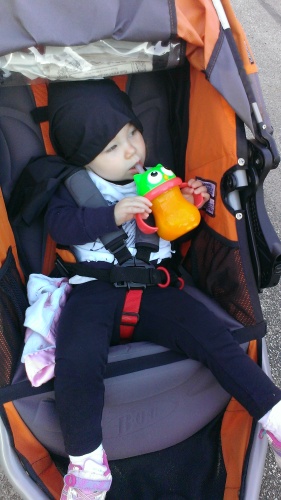 After that, I hightailed it home for a speedy shower, got us bundled up in the car again, and headed to MI City to buy out Carters.  My MIL is the best, and bought Harlow a huge new wardrobe!  She loves buying baby clothes, and I’m happy to let her!  I didn’t take a single picture during that trip, unfortunately.  Partly because Harlow only had about 1/2 hour nap in the car, and was in meltdown mode.  It was still fun, though!

Then, I hurried back home for a rare date night with my gorgeous, always-working husband.  We went to a former haunt, Silver Beach Pizza, where both the bartender and the waitress we always get were super excited to see me.  I haven’t been there since before having The Bean.  I’m happy we ended up going there, because it was our bartender’s second to last day before moving to South Carolina!  It was good to see him one last time.  We’d had a lot of adventures together.  *wink, wink* 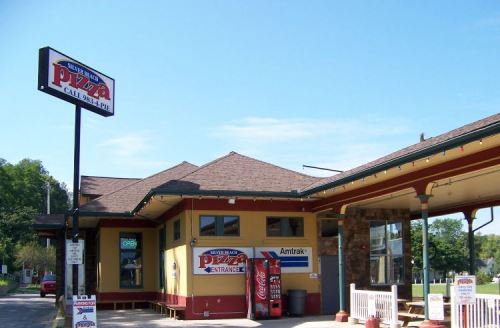 After dinner, which was a delicious goat cheese, smoked gouda, and tomato pizza and TWO glasses of Tabor Hill Demi-Sec, Chris and I took a nice walk along the beach at sunset.  It was beautiful, and I was happy to have some time alone with my love.  This view is the best part about living here & my crappy camera phone didn’t do it justice. 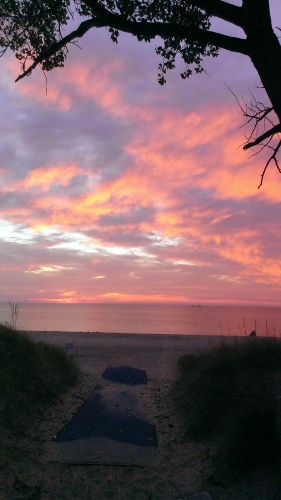 We had planned on stopping at The Chocolate Factory for some cheesecake, but because we’re old and parents, we were both too pooped, so we went home and were asleep by 9:30pm.  Wooot!  Still, an awesome night.

We hung out Sunday morning as a family, then Harlow after Harlow got up from her nap, it was time to go to her friend Ethan’s second birthday party!  They had a bounce house, and I wasn’t sure Harlow was nearly big enough for it, she LOVED it.  It was such a blast.  The entire party was ridiculously fun.  My friend, Aesha, (Ethan’s mom) and her husband did a fantastic job with everything!  I don’t have any photos of the birthday family, but I took a million of Harlow jumping around the bounce house and playing with all the new-to-her toys! 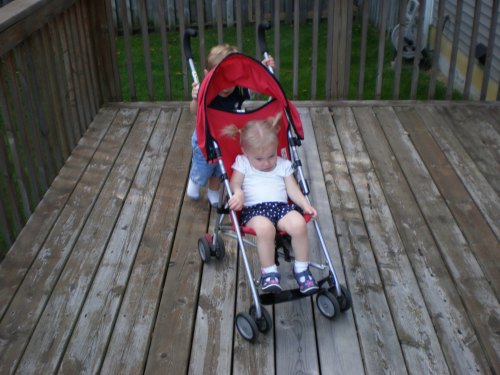 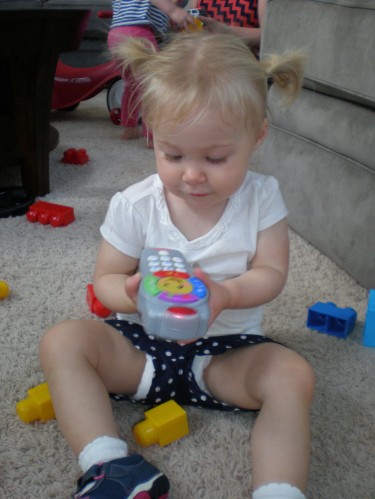 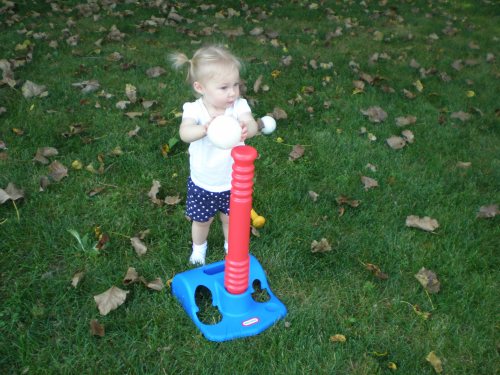 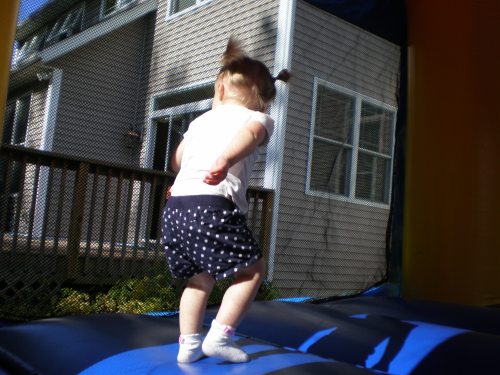 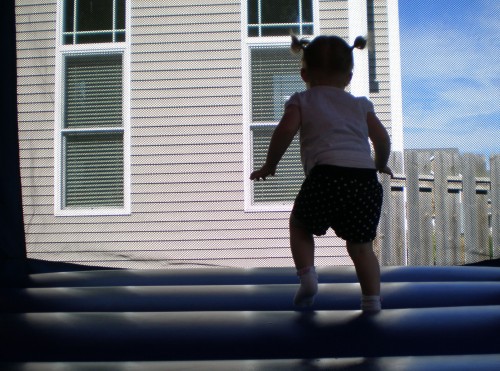 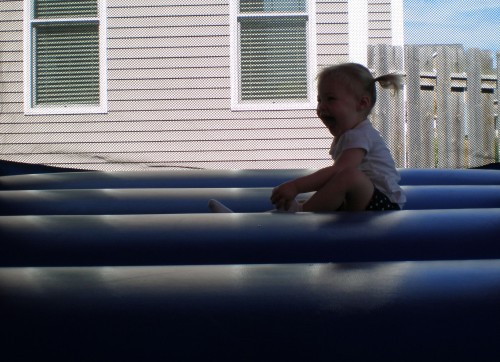 I took home one worn-out baby!  Though she had some cake and ice cream (one of the first times ever!) and a very rare juice box, she ate some dinner, then played for a bit, went for a walk with Mommy & Abbey, and finally, hit the crib HARD!  Though she still was up twice in the night (thanks a lot, teething) she slept pretty decently.

This weekend was seriously a blast.  Chris and I are already discussing having a bounce house for her second birthday!  It was all I could do to get her out of there!

Funny story, most of the babies her age cried instantly when they got in the bounce house.  Pretty much only Harlow and her “boyfriend” Luke were brave enough to play in there for their ages.  Two years and up the kids were having a blast, but most of the smaller babes were having none of it.

So, I’ll leave you with a picture of Harlow trying to go for a run with my shoes, and I hope you all had a seriously fabulous weekend, too! 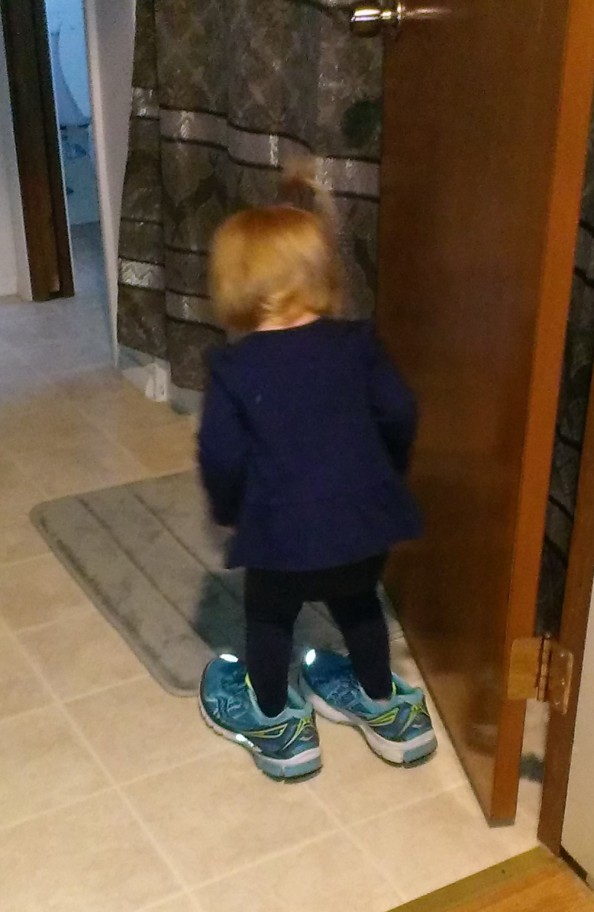 What did you do this weekend?