Will Harlow Be An Only Child?

Posted on December 31, 2014 by babystepsandmommymoves

Is it just me, or is the thought of a brand-new year just so… exciting?  I know technically it is just another day, but something feels so fresh about starting a new year.  For example, after another really bad night last night, I stopped by good old Starbucks for a full-caffeine Peppermint Mocha… AND a donut.  My justification?  It is the last day of the year…  Tomorrow I’ll start over.  It may not be the best way to go about things, but… eh.  Ya know what I’m sayin’?

Along with a new year and all the possibilities it holds, come some questions.  The biggest on my mind is that this is the year in which we will decide if Harlow is destined to be an only child or if we are going to try one more time.  This is easily the hardest decision I think we’ll ever make.

Chris and I were married for 9 years before we decided to try for a baby.  Why?  A few reasons…  we both wanted to make sure our ducks were all in a perfect row before we took the plunge (money/jobs/security), but also because we honestly weren’t sure we really needed a baby.  We had a good thing going!  In fact, we had been telling people “two years” since getting married.  We’d start a family in two years.  Nine years later, and people had stopped asking.  I think they just assumed we couldn’t or wouldn’t have children.

When we made the decision to come off the pill, I talked to my doctor who warned me that for various reasons, including my age (33 at the time) and medical history, that it would be well over a year before we could expect to get pregnant.  In fact we weren’t even trying yet, we just weren’t preventing.  Two months, three sticks, and 6 lines later, and I was pregnant!  It was, surprisingly, a huge shock.  I mean, I know how these things work, but it was SO much quicker than we expected!  I was so grateful that it had happened so easily.  Especially since so many of my friends have/had a lot of fertility struggles. 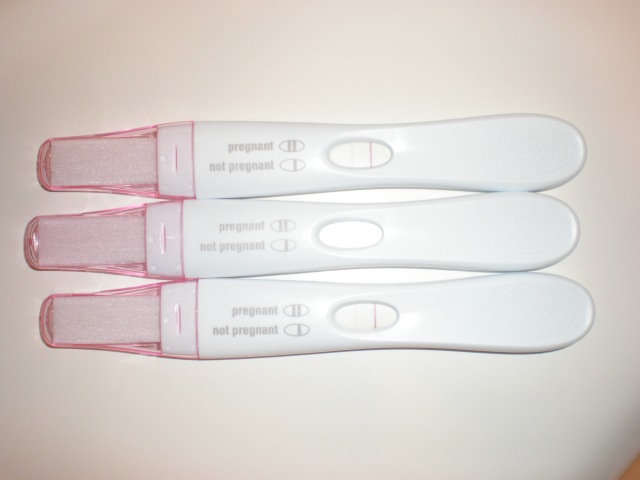 Very faint, but they’re there!

I instantly loved the little baby inside of me & knew we had made the right decision.  So much so that when at 8 weeks I was told I was most probably miscarrying, I was devastated.  Absolutely broken.  I knew that I would never take the chance again.  It was the longest week of my life.  I kept waiting and expecting to miscarry, and appointment after appointment showed that I wasn’t.

Finally I wised up and went to another doctor who performed an early ultrasound and told me everything looked just fine and there was no reason to suspect a miscarriage.  I was put on exercise restrictions and given a progesterone supplement and sent on my way.  It took until about 12 weeks for me to get excited about the pregnancy again.

After that 8 week mark, everything went super smoothly.  I had a fantastic pregnancy.  I loved being pregnant.  Everything about it.  Except mushrooms…

39.6 weeks passed in a blink and one night I thought I’d eaten too much Mexican food.  I was in labor for 9 hours before it even occurred to me that I was in labor!  I called my doctor, expecting to be told it was the spicy food, and instead told I needed to high-tail it to the hospital, because I was definitely in labor!  8 hours and a pretty darn easy delivery later (I had an epidural, but only pushed 3 times for a total of 10 minutes), I was presented with a gorgeous, healthy baby girl.

A few years ago, Chris and I went to Las Vegas for the first time.  I put down my first bet ever on a roulette table and won over $200.  I was so done gambling!  Chris basically had to force me to gamble that money away (He argued that we were in Las Vegas, for goodness sakes!  We have to gamble!).

My point is… I’m not a gambler.  I like to quit while I’m ahead.  I’m now nearly 36 years old, have had a near-perfect pregnancy, a near-perfect delivery, and a perfect daughter.  Why do it again?  Especially at my age.  I mean, I won the mommy lottery!

Plus, at this point, we can give Harlow so much.  Daycare now is a sizable house payment… actually more than a house payment, monthly.  Doubling it would be very, very hard, financially.  Right now we can easily afford it, and also afford things like swim class, extra classes in the future (she’s on a wait-list for toddler gymnastics & when she’s three, she’ll start ballet), vacations, that kind of thing.  Not to mention college!  With another baby (or two, since twins run in my family!) that sort of thing would be much harder, if not impossible.

Plus, the further away from pregnancy and new baby I get, the less I want it.  I did love being pregnant, yes, and I even loved my delivery (call me crazy!) but my body went through crazy amounts of changes!  The new baby phase was wonderful and magical, but things are getting easier and easier now that she’s getting older and easier to communicate with.  Plus, she’s so much fun now!  And honestly, I’m not sure I want to share her with another baby!  If that makes any sense…

That all being said, there are days when I ache for another pregnancy/baby.  I would love to see Harlow as a big sister.  I know she would be so loving and sweet.  Chris has a valid point, though, that what I really want is a clone of Harlow.  Just starting over from the beginning.  Which is pretty true.  If I had a guarantee that everything would be just as great the second time around (and we could somehow find a bunch more money!) I’d do it in a heartbeat.

It is also hard for me, coming from a pretty big family with several siblings, to think of Harlow growing up “alone”.

I don’t know very many people who only have one child.  My friends and family tend to either have none or two or more.

This is a long, rambling post with no real conclusion other than it is a year for a big decision for my family!  I know whatever God’s plan is will come to fruition, though, regardless of our best laid plans, so I’m trying not to worry about the outcome too much.

Anyone out there have any big decisions they have to make in 2015?

This entry was posted in Personal. Bookmark the permalink.

3 Responses to Will Harlow Be An Only Child?