Posted on February 2, 2015 by babystepsandmommymoves

Happy Monday, all!  Hope you had a great weekend!

I woke up to thigh-high snow drifts (this is after Chris snow-blowed last night) and 17 degree weather.  On a Monday.  woo.  Luckily, I made it the mile into work without going in the ditch, which was actually quite a feat, even with my fancy snow tires.  Oh, well…  At least I had a great weekend!

Saturday was nice and low-key.  Harlow got up and put on her Sassy Pants!  She pulled her (almost too small) reindeer shirt out and made me help her with her Minnie Ears.  She even insisted she wore her sunglasses to the grocery store. 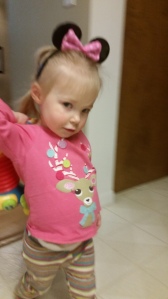 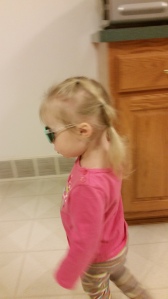 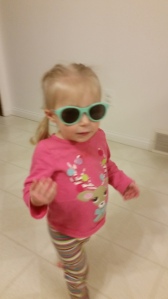 The afternoon was spent playing and watching “Elmo”, aka Sesame Street.

Sunday morning, we woke up and played for a while.  After Chris left for work (he had to work all weekend again…) I decided to try something new!  Ta-da!

Harlow’s first “painted piggies”!  She sat so still while I was painting them, but after the first (rather pathetic) coat was on, she was done, so they look a little… unfinished.  But still, super adorbs.

After nap, we ran to the corner grocery store for just a couple of things they didn’t have at the first one.  All the tellers and baggers were fussing over Harlow.  Some of them remember her from previous trips, and one of them remembered me being pregnant with her!

When we got home, I decided to try to get Harlow to not hate winter like her Mommy, so we bundled up and took it outside! 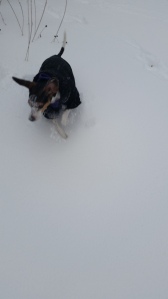 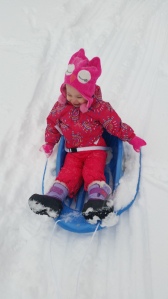 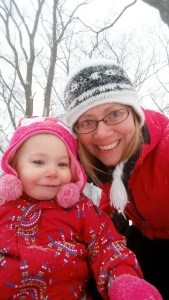 Abbey lasted the least amount of time.  She basically went potty, stuck her head in the snow, then ran to the door and looked pathetic.  Harlow loved the sled ride for a little while, but got over it pretty quickly.  When I tried to get her out of it to make a snow angel, she got a very unhappy look and wanted to go inside.  I’m with ya, kid.

I decided I wanted to cook(!) yesterday, so Harlow did a great job at entertaining herself while I chopped and diced and… erm… burned (but just the onions!).  Harlow ate one of many snacks and dinner while I made Vegetarian Quinoa Chili (using the recipe from Two Peas & Their Pod, just subbing out the hot pepper for corn). 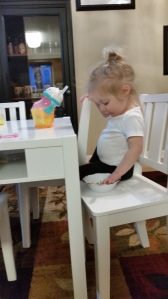 I swear!  My normally picky/non-eater ate from about 3:30pm until she went to bed at 7pm last night.  I honestly wouldn’t have been surprised to find out she’d grown a foot overnight… obviously some crazy growth spurt is on the way!

And now, we’re back at another Monday… this one, however, is the first Monday in my Sugar Free February!

Tell me something fun about your weekend!