Posted on July 13, 2018 by babystepsandmommymoves

My company throws an over-the-top event each summer, including carnival rides and games, pony rides, a petting zoo, generous give-aways (including an all-expense paid trip to Disney for a family of 4!), and tons more!  The event is always themed, with a large number of employees & employee family members in costume.  This year, the theme was Neverland (Pirates).  So I went out and purchased a pirate costume for myself, and a coordinating pirate costume for Harlow.  She took one look at it, as I was excitedly showing her, and said, “I want to be a parrot”.  Cue crestfallen mama.  Se la vi.

After I stopped crying pitiful, rejected tears, I took to Amazon to look for a parrot costume in size Betrayal/5T.  I’m starting to think that I’ve got unreasonable shopping expectations, because I can NEVER find what I want online.  They are either too small, too un-cute, or too, too expensive!  As I’m sure you know where this is going, given most of my posts of late, I decided to make my own.

I took some wire clippers, and cut off the bottom section of the wings, making sure the metal ends were not going to stick out far enough to scratch or poke, and flipped them upside down.

Then, I covered the part facing the child’s back with felt, hot gluing it into place, cutting off the excess.

After that, I just started hot gluing feathers!  It took far fewer feathers to cover the wings than I expected.  I bought two packages of red, and one package each of green, blue, and yellow.  I have enough feathers left over to do at least one more set of wings and a mask.

Note the elastic around her waist.  It is securing a tail feather, made from one of the smaller, cut-off wing segments.  I would not bother with this next time.  You couldn’t see it, because the wings were long enough to cover most of it, and the elastic cord took away from the overall look.  Plus, she couldn’t sit down with it on.  Live and learn…

The mask was only slightly trickier.  I got a stiffer felt for the red face part.  (You know how some felt is super floppy and some has a bit of heft to it?  Go for the heft for this part.)  Then I took one of her old masks for sizing (but you could also just print out a free one online – there are tons of printable options out there!), traced around it, and cut it out.  Then out of floppy felt, I cut out a yellow diamond shape.  I cut the top of the diamond in the middle, so it would curve a bit as a beak.

I hot glued the cut part to the back of the mask, curving it a bit as I placed it.  Finally, I hot glued some feathers to the top for a bit of flair!  I had left a little excess felt on the top of the mask for this purpose.  Finish it off by adding a bit of elastic chord, and you’re done.

We used a red dress she’s owned forever, and ta-da! she’s a parrot!  (She met a fellow parrot at the event!) 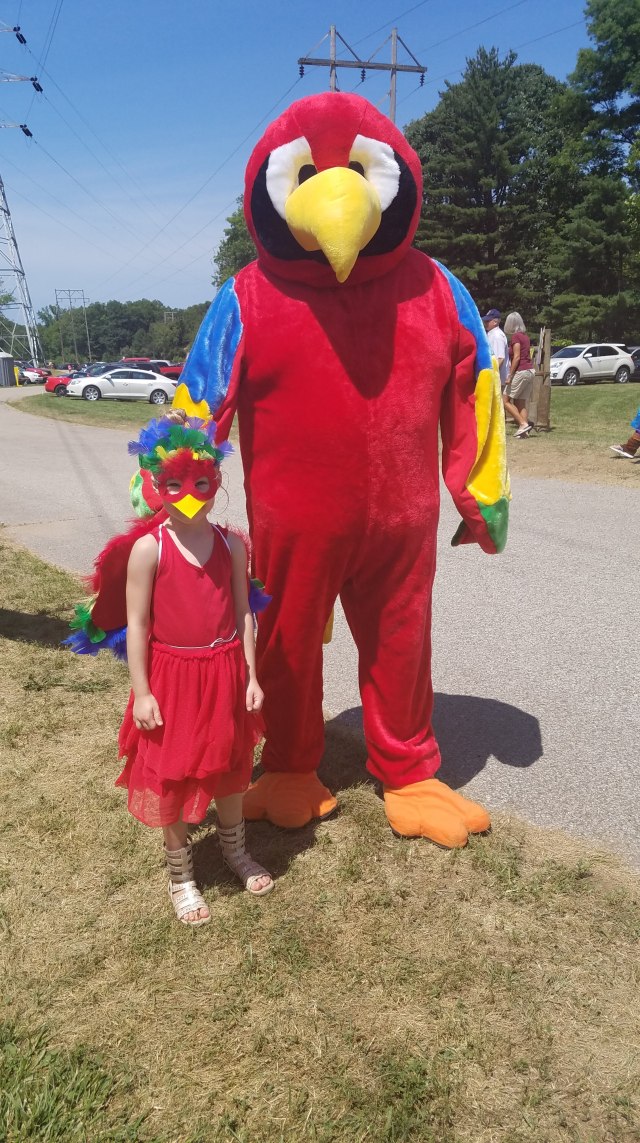 Hopefully this was helpful, and I’d love to hear if any of you try it out!  Have a fabulous weekend!